This school production of Ella Hickson’s Wendy & Peter Pan by year sevens, eights and nines (11–14-year-olds) was fairly different, as you might imagine, although surprisingly it was just as full of irreverent humour. Presumably in the interests of letting everyone have a go, there were four Peters and 10 Wendys. The young actors multi-tasked, with girls often playing boys (but no boys playing girls). Especially charismatic were Luka Shaw as one of the Hooks and – an absolute natural – Amber Gerathy as the streetwise, full-of-attitude fairy Tink.

There’s an exhilarating soundtrack, too, with the ensemble "shadows", pirates, Lost Boys and Lost Girls dancing to Beyoncé, Duran Duran, Jesse J, Jennifer Lopez, Britney Spears, Meghan Trainor and songs from Yann Tiersen’s Amelie. What would J. M. Barrie have made of that? The opening segment, set to Emily Browning’s cover version of The Eurythmics’ "Sweet Dreams (Are Made of This)" was powerful indeed. They even found space for a snippet of "Careless Whisper" by George Michael, based around a saxophone joke. The show was full of laugh-out-loud moments like that.

The story is too well-known to bother detailing here, but from the fairly straightforward plot the actors managed to draw out themes of youth and ageing, innocence and experience, family, gender inequality and bereavement – weighty matters treated with enough humour to stop it all from becoming po-faced.

A ticking-clock sound effect between scenes allowed for changes in the stage set-up and also added an ominous quality. Simple-but-clever back projections allowed for the illusion of flying, and also made it clear when we were in the Darling family home, in the Neverland forest or on the deck of the Jolly Roger.

At the end. the entire cast came back to bow to the delighted crowd and say some emotional thank-yous to the tech crew, teachers and so on. There was a moving moment when the PA sound broke down and Ariande Grande’s "One Last Time" cut out. The kids spontaneously just started singing it themselves. You could feel how much they had loved performing and how much goodwill they had generated. 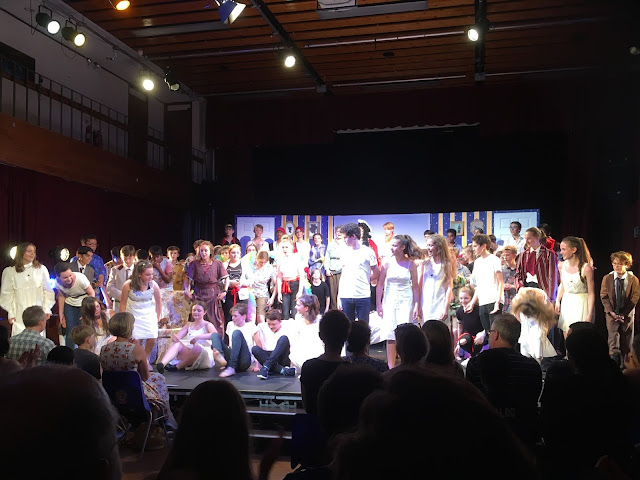