Back to school for the third of three performances of this exciting mystery-thriller.

As expected, it was a lot slicker. Entrances and exits had been speeded up and clunky scenes had been smoothed out. It was more efficient all round and I was encouraged to see how much the children had gained in confidence.

In a few instances, the understudy was there in place of the main actor or vice-versa.

The plot was a little easier to follow second time around.

At the end there were emotional speeches by the children and teachers, and presentations of chocolates and flowers. You really have to admire these kids doing this with such energy for three nights in a row.
No comments:

There are few things I enjoy more than a school play.

This is an incredibly ambitious work, written and directed by Emma Govier. The plot is massively convoluted, with a large cast inhabiting the H-shaped stage and a great many scenes taking place across a wide array of locations to explore all the intertwined narrative strands. Sometimes the plot was difficult to follow, but it all came together in a satisfying way as time went by.

This was the first night and sometimes you could tell. Several children struggled to suppress laughter as they delivered their lines. One scene simply petered out and went quiet until one of the girls ad-libbed, brilliantly, by saying “I’m bored” – in character – before they all ran off the stage.

There’s so much here that’s entertaining. I liked the three comedy policemen – useless at deducing anything and prone to fainting or being sick whenever anything grisly happens. Some of the script is hilarious, such as when one of Moriaty’s henchmen reels off a whole mini-speech about his skin-care routine. There’s also a very funny approximation of leaping off a boat and swimming in the sea. And Max Hirschkorn is such a natural in the role of Mrs Hudson, Holmes’ fussy housekeeper, that it was a shock to learn afterwards that he was a stand-in for the intended actor.

Sherlock himself is suitably enigmatic, but also endearing – such as when he disguises himself by pretending to be a pot plant. He is shy with women, and his kiss – when it arrives – is so convincingly awkward that it makes you wonder whether the discomfort belongs to the character or the actor.

There are a few dancing interludes, which are especially charming. There’s a brief ballet scene relating to Anthony and Cleopatra, plus a wonderful gypsy dance.

So many of the children excelled themselves, but the fortune teller (Mia Dacosta) and Sherlock’s girlfriend and fellow investigator (Rachel Alden) were particularly convincing.

The show is way too long at 3 hours 20 minutes (including interval), but I expect it will be tightened up considerably over the next two performances. Either way, it’s a huge achievement. 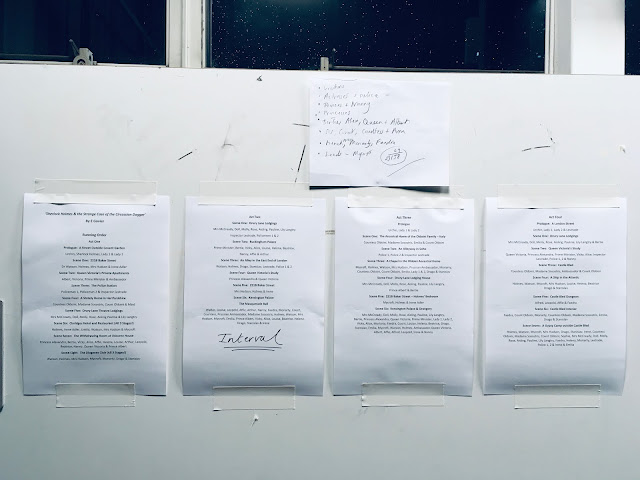 Every year Andrew Pollard brings his remarkable pantomime to Greenwich Theatre, and every year it surprises and delights. The stories may change, but the essence remains the same – a hilarious and audacious roller-coaster of a show. Sleeping Beauty is another great victory for this supremely talented writer, actor and director.

Forget the usual panto formula. While Pollard clearly loves the genre and pays homage to its key elements – not least, by embodying the archetypal Dame – his take on the form is refreshingly different and he makes Sleeping Beauty work on multiple levels. For children, it’s excitingly full of colour, adventure and impressive pyrotechnic effects, with appealing interactive moments – such as being handed magic moon rocks and urged to throw them at the stage. For adults, it’s a feast of cheeky wit with a very funny script that weaves in local and topical references (Plumstead, Blackheath, Nigel Farage, Prince Andrew) alongside plenty of daft innuendo. It’s a treat to watch the actors trying to make each other laugh, going off-piste and breaking the fourth wall.

The scenes are interspersed with – and often built around – wonderful pop music. There are adaptations of songs by The Beatles, Chic, Boney M and The Proclaimers, among others, played live and loud by the small in-house band led by Musical Director “Uncle” Steve Markwick.

The story veers wildly away from the classic fairytale, but just about retains enough of the key elements to justify the title. Ewan and Anastasia, the young couple at the centre of the plot, are confidently played by Regan Burke and Esme Bacalla-Hayes. Theirs is not a typical boy-meets-girl situation. With the help of a kindly fairy, Ewan finds himself transported from the London of 1969 to the Russia of 1869. Masquerading as “Major Thomas” – you can see the David Bowie connection a mile off, and sure enough they include “Space Oddity” as one of the songs – he falls in love with the daughter of Tsar Ivan the Slightly Irritable. But Anastasia is bewitched and left to sleep for 100 years by the evil villain Rasputin. The “mad monk” is wonderfully brought to life by the ultra-charismatic Anthony Spargo, who knows exactly how to get the audience hissing at him and his dastardly plans.

Quickly dispensing with familiar Sleeping Beauty motifs, the narrative races off into a gloriously ridiculous saga about travelling through time and space, plus a thread about Greenwich Theatre itself as way of celebrating its 50th anniversary. Indeed, Ewan is based on Ewan Hooper, a real-life local actor who saved the theatre from demolition in the 1960s.

One of the highlights of each annual pantomime is the spectacle of Andrew Pollard’s outlandish costumes, which defy gravity and belief, so special credit must go to the team of wardrobe designers. Utterly inspired visuals in which adults are turned into babies also support several moments of comedy that go beyond merely funny or clever to approach a sort of surreal high art.

Only one criticism: at times the music is too loud and drowns out the dialogue. It’s not the sort of show in which you need to hear every word, but it’s a shame that a few of the jokes are lost for this reason.

That point aside, this is an incredibly rich and vibrant affair that will fill you with a sense of well-being while making you laugh again and again.

ORIGINALLY REVIEWED FOR SPY IN THE STALLS
No comments: