Nine to Five was a 1980 film starring Dolly Parton, Jane Fonda and Lily Tomlin. Dolly wrote the theme song and then contributed additional lyrics for a theatrical version of the story, which became a Broadway musical in 2009 and now comes to Highgate. This was the debut performance – a preview night – but aside from a few sound glitches there were no signs of any first-night problems. The plot is straightforward: three female office workers seek revenge on their "sexist, egotistical, lying, hypocritical bigot" of a boss.

Produced by Joseph Hodges, who also produced Breaking Up Is Hard to Do (which I enjoyed at the same theatre in April of this year), the show is funny and sharp. The simple but ingenious staging makes the most of "office furniture". Three desks (on wheels) are constantly moved around, rotated and realigned to suit whatever structure the set requires – from a dancing platform to a mortuary slab.

The three female leads – Amanda Coutts (Judy), Louise Olley (Doralee) and Pippa Winslow (Violet) – are entirely convincing and have powerful voices. They needed them, too, as the band was so loud that it often threatened to drown out the singing. Also superb was Samantha Giffard playing the bafflingly lovestruck Roz.

The songs by Dolly Parton really make the show, from the classic title track to the perfectly judged "Backwoods Barbie". Turning things on their head there's also a clever composition called "5 to 9", about the emotions felt between work hours.

All this, and a positive message about gender equality and realising your potential. Sadly, in 2017 (with the BBC pay gap scandal still fresh in people’s minds) the theme of sexism in the workplace is every bit as relevant as it was in 1980. It's a credit to this show that it tackles this "issue" with such humour and intelligence. 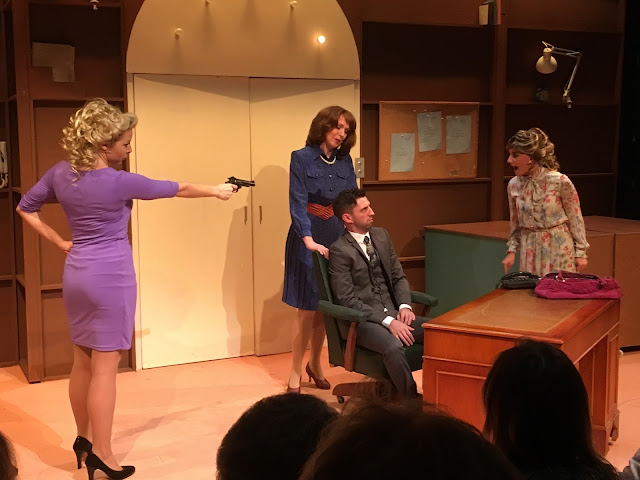 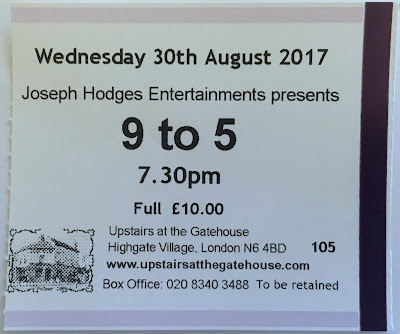 Labels: • All reviews on "I Went to the Theatre...", • Show: 9 to 5: The Musical, • Theatre: Upstairs at the Gatehouse (Highgate)
Newer Posts Older Posts Home
Subscribe to: Posts (Atom)