It was good to have writer and director Andrew Pollard back after his year off (see Cinderella). It was also a delight to see Anthony Spargo again taking on the role of the villain. He enters the stage singing the Rolling Stones’ “Sympathy for the Devil” – an excuse for his obligatory annual Mick Jagger impersonation – and full of his usual overwhelming charm and charisma.

The sound was terrible where we were sitting on the far left of the theatre, with the too-loud music bouncing off the walls and often muffling the vocals. Sonic clarity is important when the words are so clever and funny, and also when there's so much noise coming from the children in the audience. It was also frustrating to be sitting under a jet of air conditioning that was hot in the first half and which turned icy after the interval.

These gripes aside, it was a highly enjoyable show with plenty of big laughs. As always, the threadbare “plot” was the least important element – instead of going to live on an island, Robinson Crusoe ended up in the USA. It’s the songs and the on-stage banter that make it so special.

As usual, they managed to squeeze in a couple of scenes of surreal comedy gold – one based entirely on fish puns and another involving anaesthetics in a dental surgery.

Musically, it offered “All Together Now” (The Beatles), “How Deep Is Your Love?” (Bee Gees), “Let’s Stick Together” (Wilbert Harrison) and “Man! I Feel Like a Woman!” (Shania Twain). The singalong competition judged by “Uncle Steve” was with the “Baby Shark” song, which Pollard correctly observed would mean nothing to anyone over 30.

There were topical and local jokes about Brexit, Theresa May, Donald Trump and Greenwich, along with all the usual daft elements. It’s essentially the exact same show each year, but with ever more inventive costumes. The sets are also inspired, and a scene involving projections of a gold mine effectively evoked the movement of a mine railway journey.

A slow start didn’t bode well, but once Pollard and Spargo hit the stage this was a real treat.
No comments:

Labels: • All reviews on "I Went to the Theatre...", • Show: Robinson Crusoe, • Theatre: Greenwich Theatre

Written by Dusty Hughes and directed by Alice Hamilton, Paradise is a gently profound play about ageing. Roddy (played by Geoffrey Freshwater) and Goose a.k.a. Amanda (Sara Kestelman) are old friends who have enjoyed lives of relative luxury in an old-age home. But a change of management brings with it a stricter regime and tests the limits of their relationship.

There are many stands running through this – the onset of dementia, what it meant to be homosexual in Britain during the years that this was illegal, how corporate-speak denies us our humanity and what it means to love someone when most of your life (and theirs) is now in the past.

There are only four actors and they have to carry a lot of fairly heavy material, but they handle this in a subtle and sophisticated way. Rebekah Hinds and Claire Lams are excellent as the manager and care assistant.

There are plenty of lighthearted moments, too. The funniest of these involves Roddy reciting British prime ministers in a sort of rhythmic dance as part of a memory-recall exercise.

The play gathers gravitas as you learn more about the lives of the four individuals. By the end you are left feeling sadder and wiser.
No comments:

From the outset I knew this wouldn’t be a standard evening at the theatre. The opening set piece – “Bohemian Rhapsody” performed with absurd new lyrics – throws you in at the deep end and lets you know what to expect. The Not Too Tame theatre company’s Cinderella: A Wicked Mother of a Night Out! is comical, irreverent and deliberately ridiculous. The show is noisy, smart and streetwise, and you are never more than a few seconds away from another funny line.

To say this show is “loosely based” on Cinderella would be a major understatement. Luke Barnes’ script riffs on motifs from that fairytale and rides a huge anarchic truck through the middle of it with no attempt whatsoever to be faithful to the source material. It’s so fresh, relaxed and spontaneous that it feels improvised. The small cast operate in your midst and ignore the stage altogether.

The “story”, what there is of one, explores the fate of the young, orphaned Cinderella (Gemma Barnett), who works in a pub with her smelly, suicidal dog Buttons (Alex Griffin Griffiths). The latter spends most of the evening carrying a prosthetic leg. (You eventually find out why.) Cinderella also lives with a wicked stepmother called Judy Garland (Jess Johnson) and her ugly sisters Simone and Garfunkel. (Some of the audience might have been too young to get that joke, but I appreciated it.) Played by Louise Haggerty and Naomi McDonald, these two absolutely steal the show with a relentlessly flirty, hilariously bitchy double act that’s a delight to watch.

Jack Condon inverts the character of Prince Charming so that his name becomes somewhat ironic. Meanwhile Jack Brown is “Mike”, an amiable compere with long hair, a beard and a glittery silver dress. Mike holds the whole thing together, although much of the show’s appeal comes from the way it seems to teeter on the verge of collapse.

Jimmy Fairhurst’s direction makes the most of the small space available, and it works because the bar in which we’re seated naturally becomes the pub in the story. A karaoke machine is utilised at regular intervals for the likes of “Rocking Around the Christmas Tree” and “Stand by Your Man”, with the cast singing lustily and drawing the audience into the act without humiliating anyone too much. A few punters are picked on mercilessly, but the actors are skilled enough to gauge who is happy to play along.

Don’t be expecting anything approaching a standard theatre production: this certainly isn’t a plot-driven narrative experience. Plus, if you’re offended by “colourful” language then it’s probably not for you. It’s perfect for a fun night out with a bunch of mates, but don’t take your young kids or elderly parents. The energy is infectious and has the effect of making you feel pleasantly drunk even if you’re still sober. You soon find yourself grinning, then laughing out loud, swept along by the rowdy exuberance. And if all that isn’t entertainment enough, you’re even invited to take part in your own karaoke session afterwards.

REVIEWED FOR THE SPY IN THE STALLS AND ORIGINALLY POSTED HERE.
No comments:

Labels: • All reviews on "I Went to the Theatre...", • Show: Cinderella: A Wicked Mother of a Night Out!, • Theatre: London Welsh Centre 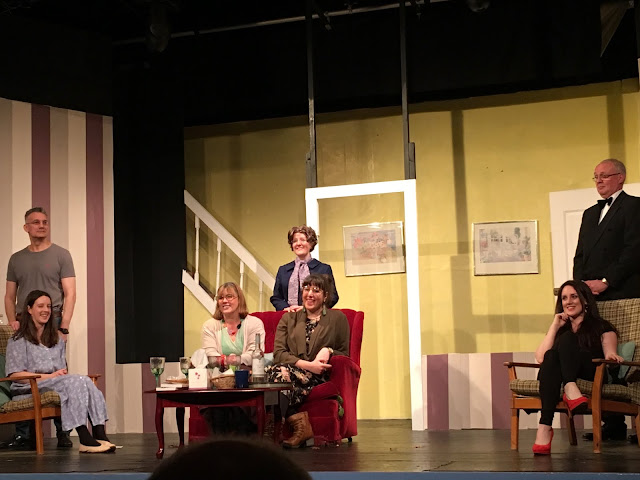 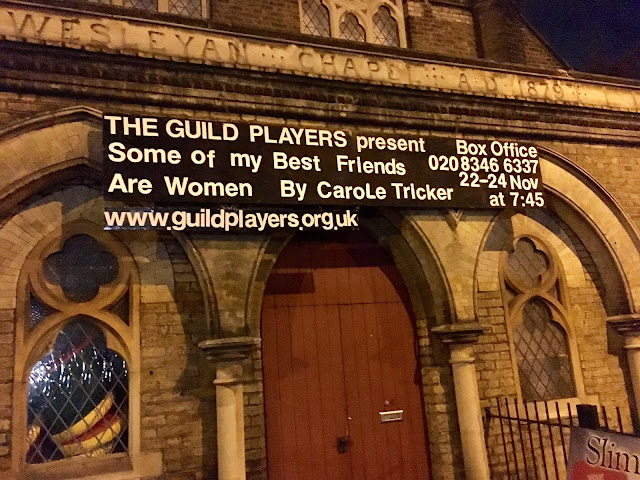 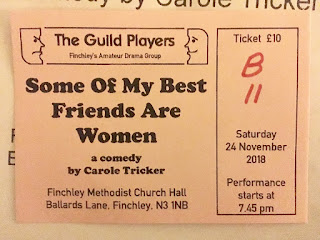 Labels: • All reviews on "I Went to the Theatre...", • Show: Some of My Best Friends Are Women, • Theatre: Finchley Methodist Church Hall 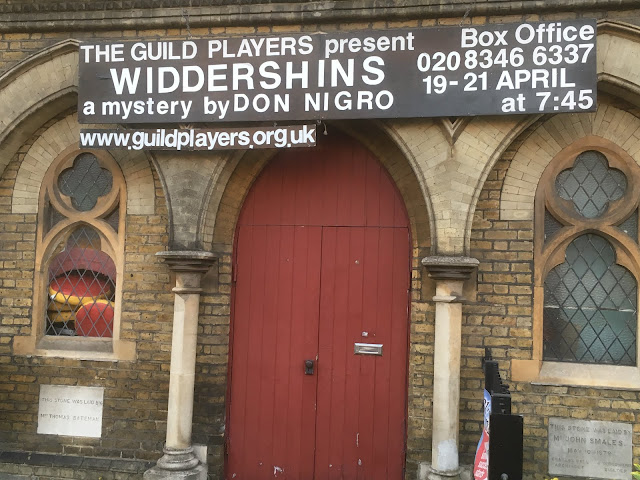 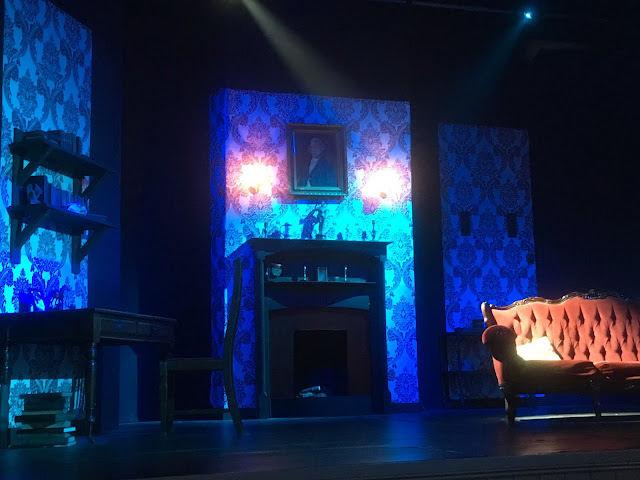 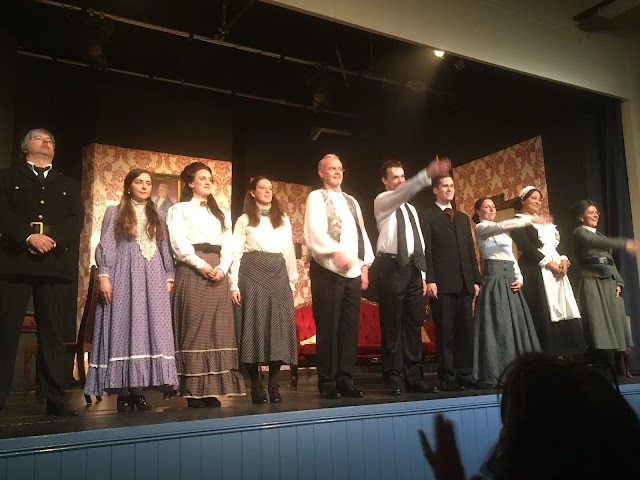