04/06/16: Notes from Underground, Upstairs at the Gatehouse, Highgate

In this dazzling production by Traffic of the Stage, Fyodor Dostoyevsky's novella is updated from St. Petersburg in 1864 to London in 2017, in a way that makes perfect sense. John Cooper’s play, directed by Harry Meacher, tackles big themes including commerce, social status, identity and what it means to be a member of a society that dismisses you as a “loser” or a “weirdo”. The company put on a draining and exhilarating performance that, ultimately, is desperately sad.

Giorgio Galassi is absolutely wonderful as the existentialist narrator/protagonist (named simply "man" in the programme credits), a semi-reclusive intellectual who struggles to communicate with his peers and work colleagues. His simmering rage and frustration is articulated so convincingly that you simultaneously relate to his suffering while feeling a growing sense of revulsion at his self-absorption and verbal violence (warning: there is some very “strong” language in the show).

Anna Danshina is utterly convincing as the earnest, well-meaning and misunderstood Russian call girl Liza, who identifies with the man’s pain while battling to find a way through it. Her companion Ylenia is pitched spot-on by Olga Starpovich, especially as the night’s booze takes hold and she begins to stagger around in her high heels. Wealthy toffs Roger (Matthew Duckett) and Simon (Callum John Hill) are all too believable as the ghastly posh guys who order women like others order pizza. Finally, there’s Robert Artlett, who is versatile and believable as various waiters and barman. In fact, all but two members of the highly skilled cast effortlessly double up on smaller roles.

In today’s Sunday afternoon performance, the six actors on stage played to an audience of only 11. That’s a huge shame because this is a terrific show – one of the most emotionally involving I’ve ever seen – that's deeply intense and yet surprisingly funny. It deserves to be experienced by more people. 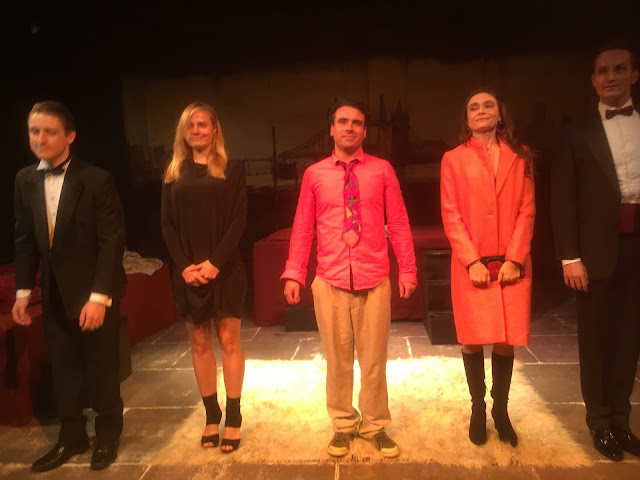 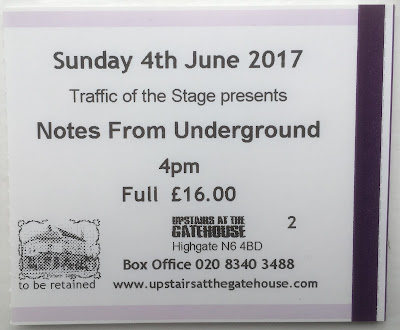 Labels: • All reviews on "I Went to the Theatre...", • Show: Notes from Underground, • Theatre: Upstairs at the Gatehouse (Highgate)